Listening to music is easier than it has ever been. Spotify, Apple Music, and SoundCloud are all ready to fill your ears with more music than you could ever listen to. As a user, you pay a fixed monthly fee for this easy access and the streaming service then passes that money on to the artist right? Well, not quite.

In theory, the artist receives a certain amount of money per play. Rights holders like music labels, producers, musicians, vocalists, etc., are all claiming their share of the revenue generated. Figuring out who to pay and how much to pay them, therefore, becomes a complicated task. Metadata, which accompanies tracks, contains info such as who the right holders are. However, this data is often incomplete and takes just a couple of seconds to be stripped away. Incorrect or missing metadata means that an artist may not get paid for their work. This is a huge problem for smaller artists, as every bit of revenue can make the difference between being able to pursue a career in music or having to find another source of income.

Blockchain has the potential to solve this problem. More specifically, the smart contract component of blockchain can include which percentage of the revenue goes to which member of the band, the label, the manager, etc. It can even give a quick way of contacting all the involved rights holders for licensing queries.

By logging all the rights holders to a specific song on the blockchain, you basically create one big transparent database which can be viewed by anyone at any time. Artists receive their share immediately instead of months or even years later as is now the case.

Musicoin, a streaming platform with its own accompanying cryptocurrency, is aiming to do exactly that. Artists who choose to publish their music on the Musicoin platform receive compensation on a pay per play basis. More surprisingly, the users listening to music on Musicoin can do so for free. You won’t find any ads on the platform. Instead, Musicoin encourages listeners to tip their favorite artists or purchase show tickets and merchandise all with the $MUSIC currency.

Underlying the Musicoin system is share-ism. It’s the belief that the content creator should be rewarded the most for creating and sharing his work. That compensation should increase in proportion to their activity on the platform.

Even more powerful is what blockchain can do in terms of artist/fan interaction. Artists can include a parameter in the smart contract which shares a percentage of the revenue generated with fans who shared their songs. This incentive creates a powerful referral program. Once the artist has reached a certain level of promotion, he can then just as easily dial down or end the revenue sharing. Fans can then spend the acquired tokens in that same ecosystem towards merchandise or concert tickets. Fans turn into active promoters. 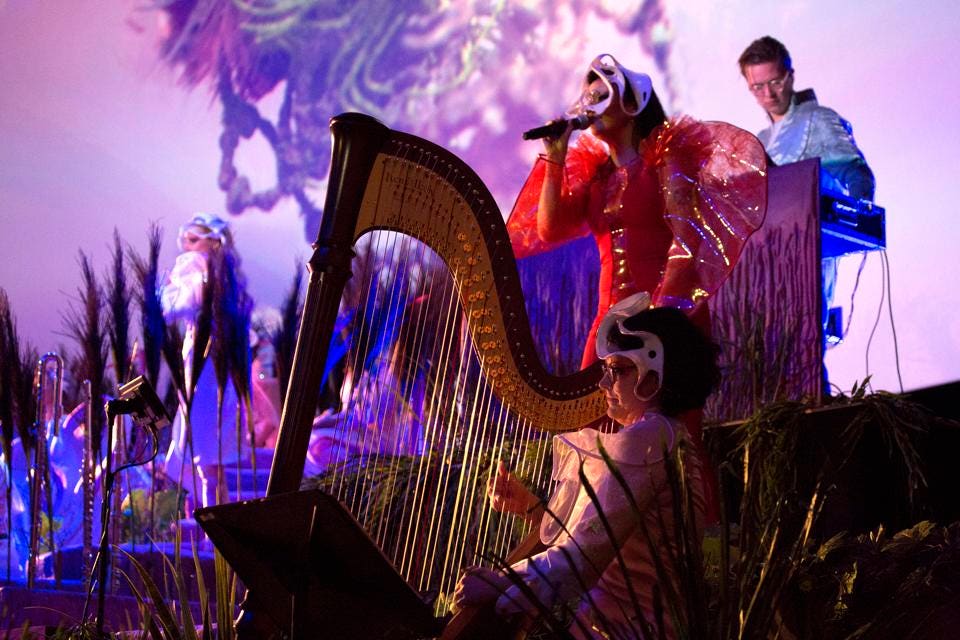 Björk is one of the first major artists to have integrated blockchain into one of her releases. Fans can purchase her new “Utopia” album with existing cryptocurrencies such as Bitcoin and Ethereum and will be able to collect crypto rewards in the form of “Audio coins” when engaging in social media interactions. These can then be spent to buy merchandise or exchanged into fiat.

Blockchain applications for music are in their early days and still have to prove themselves. To gain traction, it will take more than just the musicians to get on board. The biggest hurdle for the fans might be the relative unknown factor of blockchain itself.

The Bridge Between Blockchain and Music Lovers

Trying to bridge this gap between the technology and the users is Volareo, a company developing a smart speaker which aims to bridge the digital of music and blockchain with the physical presence of a voice-controlled speaker. “Our goal is to aggregate these different blockchain based music services that are currently emerging. Think about blockchain music streaming services, blockchain ticketing or merchandise services. By building a smart voice-enabled speaker and an app platform, we bridge that last mile of getting the music to the listener,” says CEO and founder Nick Yap. “Blockchain music has a huge potential to drive hardly needed revenue to artists, especially to independent artists. Transparently, directly and instantly.”

There is no doubt that blockchain can help artists to receive the compensation they deserve and engage fans on a new level. The question remains though whether the music labels are ready to embrace blockchain or will they, just as with every other major innovation of the past 30 years, try everything in their power to stick to the old ways?